Use of Force by law enforcement officers, specifically in self-defense or in the defense of another individual or group, may be necessary in certain instances. Data collection participation by federal, state, local and tribal LE and investigative agencies is considered voluntary and helps police and federal law enforcement staff report data at local, state and national levels.

Optimum Technology designed SWIFTFORCE™ so LE agencies can easily report LE Use-of-Force incident data from any device to their states and to the FBI by using this Web browser-based, data-entry software solution.

SWIFTFORCE helps users report basic information about the circumstances, subjects and officers involved in use-of- force incidents. To protect privacy, the SWIFTFORCE software and FBI do not collect certain case specifics, such as the names and addresses of the suspects, or other people involved, or if the use of force was justified. Instead, the data elements collected include the date, time or offense of the incident or reason for contact; the age, sex, race, and ethnicity of suspect(s); and whether the officer(s) was/were on duty or injured.

The three Use-of Force categories to choose from include:

Once a category is chosen, the user can assign the agency, agency case number, incident date, hour and minute to then create the Use-of-Force Report, followed by the location, as shown in the example below: 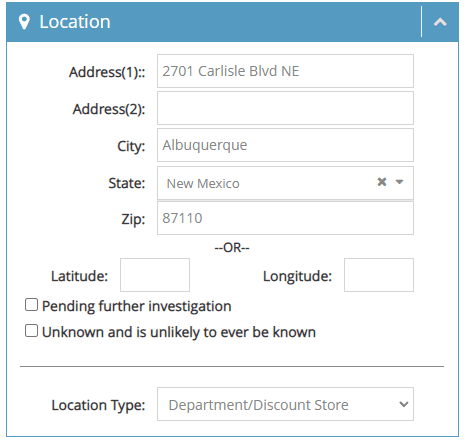 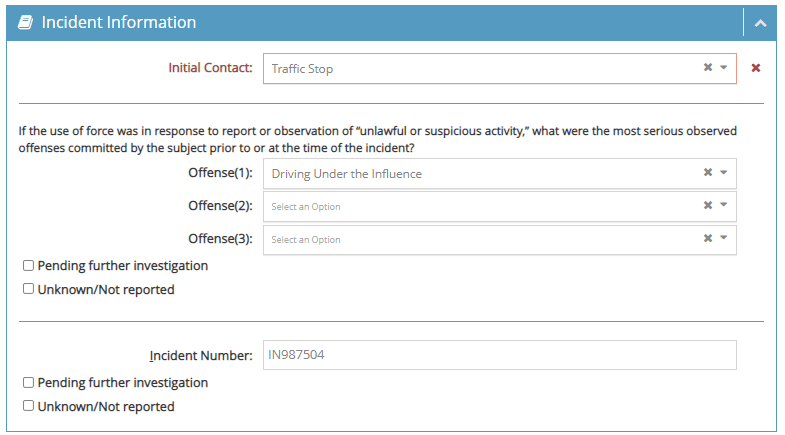 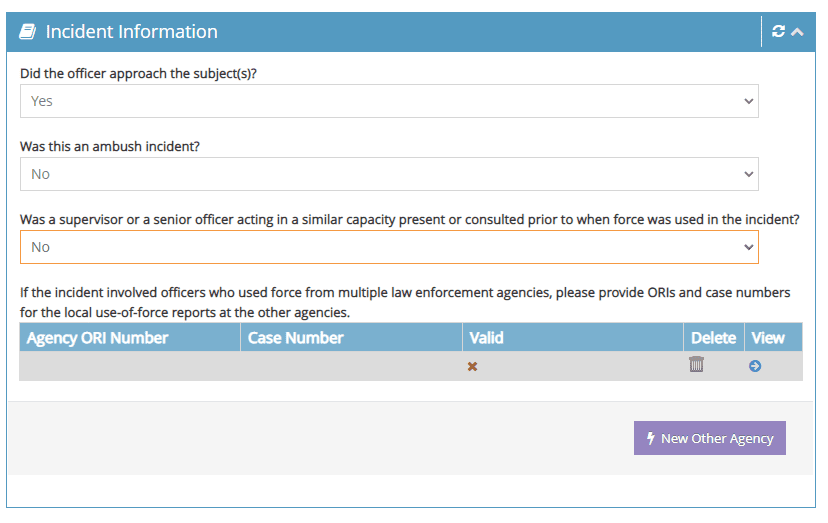 SWIFTFORCE is designed so the user can choose Use-of-Force Incident Information from drop-down options with simple clicks of the mouse.

Initial Contact choices include “Follow Up Investigation,” “Mass Demonstration,” “Response to Unlawful or Suspicious Activity,” “Routine Patrol Other than Traffic Stop,” “Traffic Stop” and many others.

If the use of force was in response to a report or observation of unlawful or suspicious activity, up to three of the most serious observed offenses committed by the subject prior to or at the time of the incident can be documented.

Examples include certain Group A and Group B Offenses such as “Murder and Non-Negligent Manslaughter,” “Disorderly Conduct,” “Driving Under the Influence,” “Rape,” “Robbery” and “Animal Cruelty”.

The Incident Information section also includes officer information, including if the officer approached the subject(s), if an ambush incident occurred, and if the incident involved officers who used force from multiple law enforcement agencies.

Users can enter the number of Subjects that received serious bodily injury or died in the Use-of-Force incident. Subject(s)’ demographics (sex, race, ethnicity), physical descriptions (age, height, weight) and mental or physical impairments, injuries may be added to the UOF report, plus the types of threat to the officer(s), and force to the subject, and if the subject resisted the officer(s).

SWIFTFORCE also prompts the user to enter the total number of officers from
all responding agencies, as well as from the user’s agency, who applied force
during the incident. The officers’ identifications (IDs), genders, and ages are
also logged in the report. 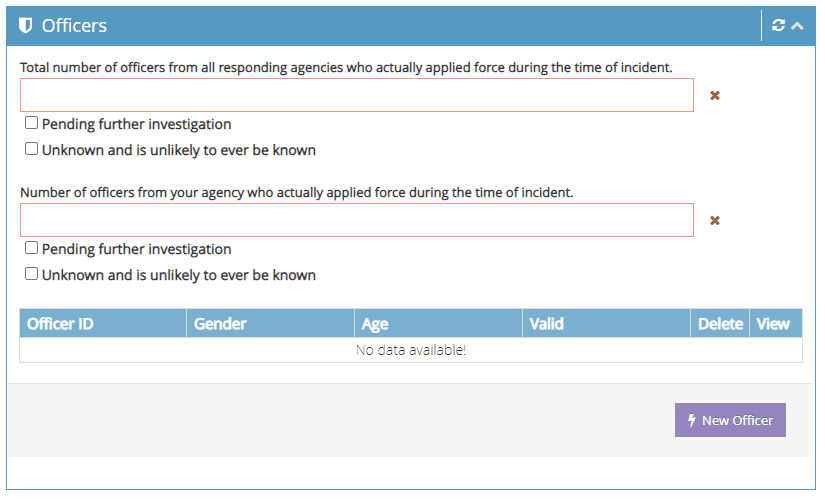 The Use-of-Force data does not report whether law enforcement followed policy or
acted lawfully, as these are not required or collected by the FBI. SWIFTFORCE does
give agencies UOF-data-reporting transparency to help the FBI provide and share
UOF incident statistics nationwide.

Report fields are built with validations for data accuracy

It can be integrated with a Records Management System (RMS), or with a Uniform Crime Reporting National Incident-based Reporting System (UCR NIBRS) Repository or serve as a standalone UOF reporting solution.

SWIFTFORCE is an affordable UOF solution and is quick to implement.

Report fields are built with validations for data accuracy

It can be integrated with a Records Management System (RMS), or with a Uniform Crime Reporting National Incident-based Reporting System (UCR NIBRS) Repository or serve as a standalone UOF reporting solution.

SWIFTFORCE is an affordable UOF solution and is quick to implement.